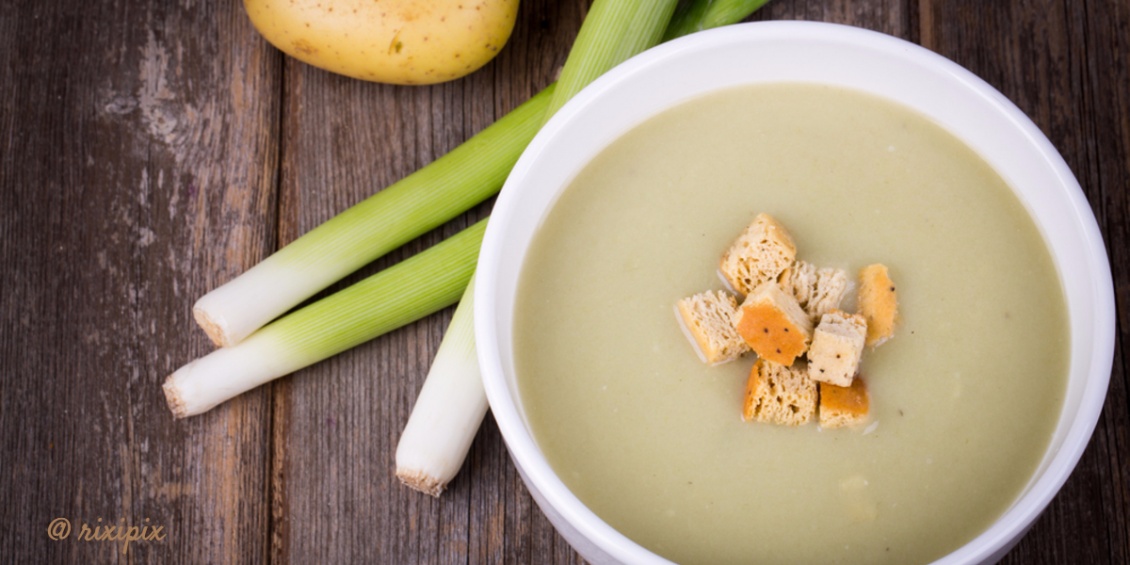 French Leek and Potato Soup – a French country style Vichyssoise – ranks high on our list of comfort foods in the soup category.

It is my Dad’s favorite soup, dating back to World War II years. I have letters, even telegrams, stating that a huge steaming bowl of leek and potato soup would hit the spot when he arrived home.

Take a quick look at  the Soup Category
We make all kinds of yummy soups!

Dad’s Favorite: A Bowl of Leek and Potato Soup!

French leek and potato soup – a creamy country soup – ranks high as comfort foods. It’s been Dad’s favorite soup since he set foot in France in 1944.

His French mother in law introduced him to this simple soup made with fresh garden vegetables – in this case, straight from our potager and picked a few hours earlier. 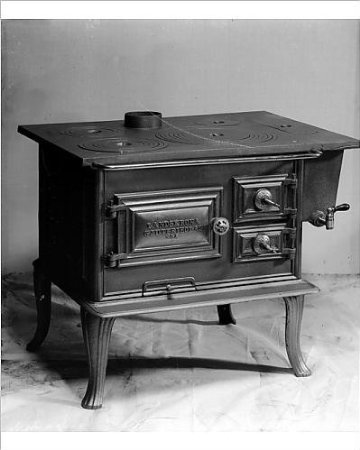 You cannot mess up this recipe.

With a bare minimum of ingredients, it is easy to prepare, and results in a creamy blend of potatoes, onions and leeks dressed up with a small amount of heavy cream.

You can make it as rich as you like with the addition of cream or lean and green by simply blending the vegetables into a smooth purée.

You can also eat the soup cold or piping hot – the way we prefer it.

Grandmother’s way of serving it during those early years was to mash the vegetables into a smooth purée then top it with a pat of fresh butter with a side dish full of fresh baguette slices.

The immersion blender makes easy work of it. She used an old fashioned wooden potato masher that left wonderful bits of veggies in the soup.

The melting butter would create a little pool of golden goodness that tasted just as good as cream.

Grandmother made this soup in a battered old pan on top of a wood cooking stove much like the one pictured on the left.  I may just have to add a modern version of a vintage wood burning stove to my kitchen!

I make mine in a slow cooker. This soup is the perfect set it and forget it type recipe.

If you buy a bunch of whole leeks, be sure to rinse them under running cold water until there is no longer any trace of dirt. Remove the outer leaves. then slice the stalks into portions about 6 inches long and soak them for at least half an hour.

Drain the water, cut the stalks in half and soak them again. Leeks are notorious for holding on to the dirt they grow in!


Better yet, buy several ready-made packs of precut and cleaned leek and potato combos at Wegmans®! Those work like a charm.

Our Recipe for French Leek and Potato Soup

You will note that although I used an immersion blender, I did not blend the soup into a liquid state. It was purposely left with small chunks of potatoes and onions to closely resemble the texture of Grandma’s leek and potato soup. Butter included.

Ok.  It’s not Julia Child and Jacques Pépin’s version of the soup but I will content myself with having an autographed copy of Julia’s Mastering The Art of French Cooking.

Do you have a Prime membership? In the 9th episode of their Cooking at Home video series, the two legendary chefs prepare a Leek and Potato soup as well as three other French soup classics.


In any case, I prefer my grandmère’s way of preparing this soup.

P.S. Did you know that Heinz® offers a canned version of Leek & Potato soup?