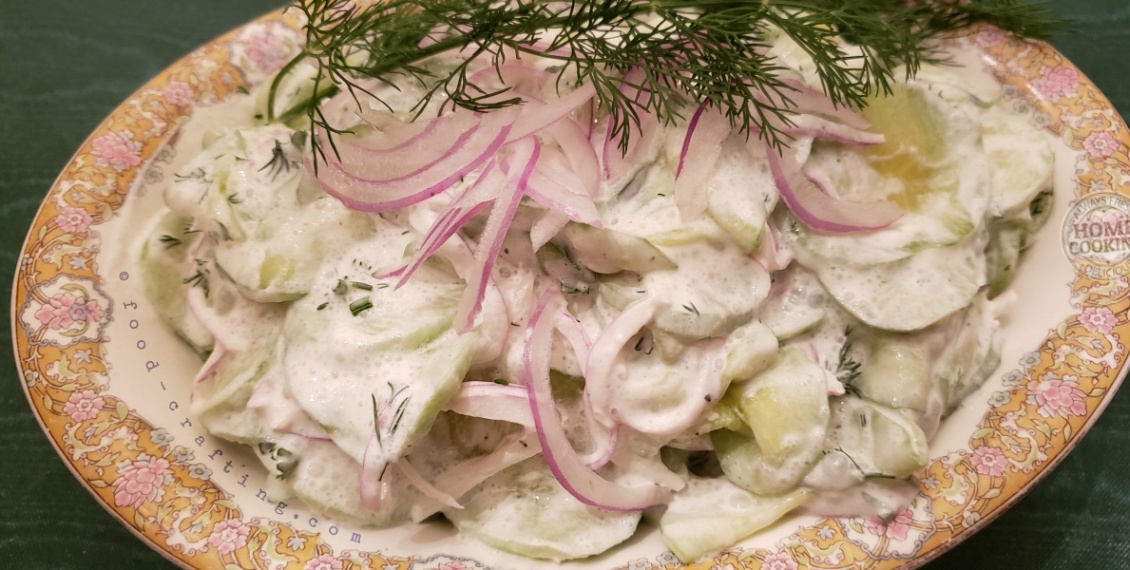 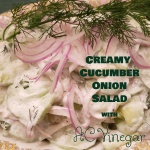 Old Fashioned Cucumber Onion Salad – This Dutch cucumber salad is as simple as it gets when it comes to cool and creamy. And it’s the perfect dish to serve with grilled or broiled salmon.

This quick and easy salad has been around for generations and was as popular in the “good old days” as it is today.

There are very few ingredients in the recipe but the flavor can be varied with the addition of a single ingredient.

Along with tomatoes and herbs, cucumbers are one of the easiest vegetables to grow in even the smallest vegetables garden or on your deck.

Might just be me but cucumbers straight from the garden (or Farmer’s Market) always taste better than those found in the produce department!

Originally a German dish, this is a Pennsylvania Dutch recipe that seems to have made its way to the best restaurants and kitchens everywhere.

According to the many prepared menus I’ve found in vintage recipe clippings from my mother in law’s collection, cucumber salad was a Spring salad to be served with boiled salmon and potatoes – at both casual and elegant dinners.

Boiled salmon? No way. Sadly, they did not mean poached. I prefer oven baked, broiled or grill.

Boiled salmon was apparently quite popular. At least in 1900 and even 1922.

Here’s a sample dinner menu from June 1900 featuring meat instead of salmon or another type of fish!

In 1861, a coleslaw cutter or cabbage shredder was recommended as desirable to make fast and easy work of slicing cucumbers!

Yesterday I used my Mandoline and wore a cut-resistant glove ☺️

I washed and peeled the cucumbers. The Mandoline was set on the #1 setting which is the thinnest cut available.

It is difficult to use the hand protector when slicing cucumbers so DO wear a cut resistant glove and stop slicing when you have about one inch of cucumber left. Snack on those pieces while making the salad.

The cucumbers are sliced directly into a bowl. Separate the slices without tearing them and salt to taste.

Toss the cucumber pieces several times to distribute the salt, then salt again. After a couple hours, the bowl should have about 1 cup of water.

How To Keep Herbs Fresh In The Fridge

I’ve been successful at drying certain herbs like fresh bay leaves but I’ll be the first to admit that I waste a lot of expensive herbs.

For example, both the broiled salmon and the cucumber salad called for parsley and I decided to add fresh dill to the salad. Nothing tastes as good as fresh herbs!

But it is not easy to develop a week’s worth of menu so as to use the entire pack of fresh dill. As a result, most of it goes bad before I can use it.

Fresh dill comes in small clamshell packs which are not as economical and often not quite as fresh as a large bunch of fresh herbs.

My fridge has a nice wide shelf in the door – a shelf wide enough to hold a large herb keeper. It makes it possible and handy to always have a selection of fresh herbs. And they stay fresh for an amazing amount of time.

Try fresh dill in a sliced beet salad drizzled with a shallot vinaigrette!

Cool and creamy old fashioned cucumber onion salad is the perfect side dish for grilled fish, especially salmon.   Make it your own with the addition of different herbs.  It may be served on a bed of lettuce leaves and tomato slices. 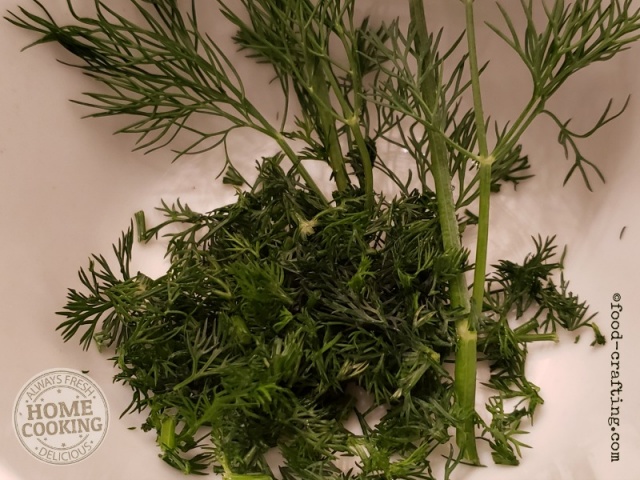 In a dry bowl, add the salt and cracked pepper to taste.

Add the apple cider vinegar and stir to dissolve the salt. Oil is optional.

To the vinegar mixture, add half as many sliced red onions as you like. 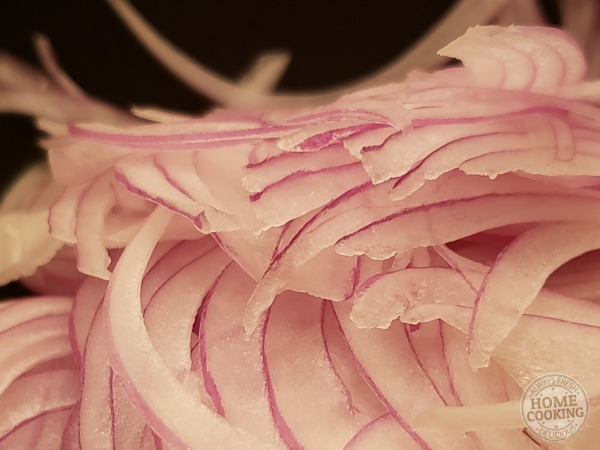 Add the sour cream and mix thoroughly with the vinegar and onions.  You want a smooth mix.

Combine well, then add half the sliced cucumbers.  Toss lightly to coat the cucumbers.

Add more red onions if you like and the rest of the cucumbers.

Top with the fresh herbs.

Combine well until the cucumbers are completely coated with the creamy dressing.

So Many Salad Variations!

On Sundays, we have dinner with Mom – a tradition she relishes from her childhood days when Sunday dinner with grandmère et grandpère was de rigueur.

I served the cucumber salad with broiled salmon and baby potatoes.

She ate everything without saying a word because she was hungry. But, as soon as the last mouthful was swallowed, out came the “at home, we made cucumber salad this way” variations.

As an herb, dill just goes with salmon, sour cream and PA Dutch. But if you want an Italian twist to your cucumber salad then use fresh chopped basil.

A touch of oregano and it becomes Greek. Make it French by using fresh tarragon or chives.

As with the dill and sour cream, red onions also say Pennsylvania Dutch! If you prefer a milder onion taste, use Vidalia onions. Of course, you can use shallots or either white or yellow onions – as long as all are sliced paper thin.

Food Huggers® reusable silicone food savers help keep your cucumbers and onion leftovers fresh long enough to enjoy use them in other recipes.

Oil or No Oil?

Personally, I prefer not to mix oil in sour cream. I’m either going to make a regular vinaigrette or a sour cream dressing. Season the sour cream with the apple cider vinegar or tarragon vinegar but oil is not needed.

This recipe replicated a typical Pennsylvania Dutch side dish but there are multiple variations to this salad including my grandmother’s version.

Hers is a French old fashioned cucumber onion salad!

Slice the cucumbers as thin as possible. Salt them and allow them to sit for a couple hours. Drain and let them sit in the sieve for about another hour.

Slice the cucumbers as thin as possible. Salt them and allow them to sit for a couple hours. Drain and let them sit in the sieve for about another hour. Dry with a paper towel.

Make tarragon vinaigrette or just drizzle oil and vinegar on the cucumbers and season to taste.

Toss to distribute the dressing evenly. Taste and adjust seasoning if needed.