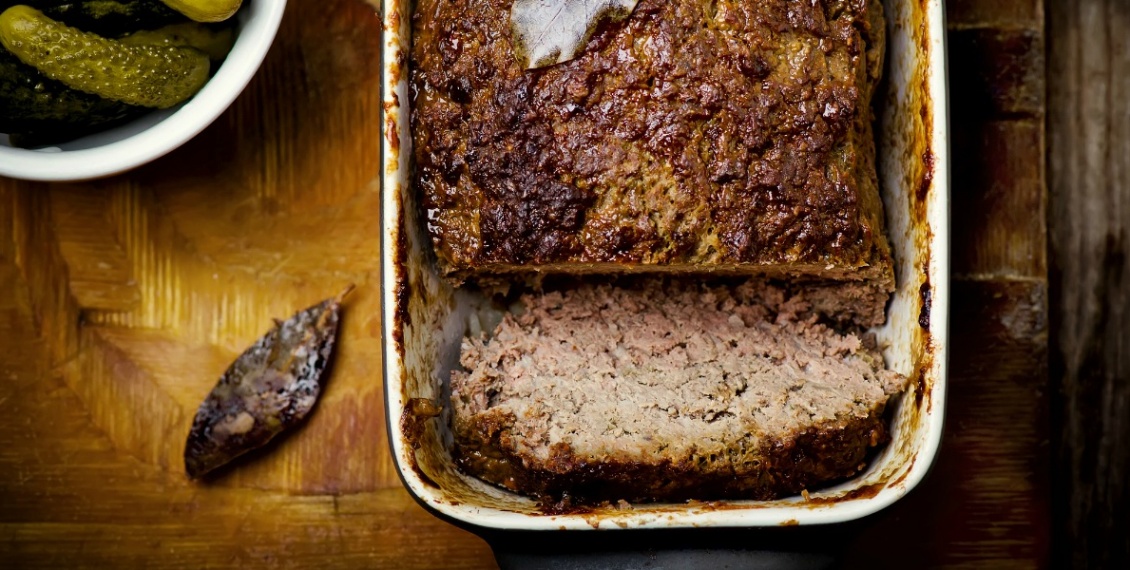 It is often referred to as Pâté Maison for the simple reason that you can vary the recipe in so many ways and make it a home style specialty.

Notre Grandmère L. – great-grandmother – was a fabulous cook who gifted us with so many scrumptious recipes. She even made her own cherry brandy!


However, pâté was definitely her specialty. Pâté de Campagne made with fresh rabbit.

When served as an appetizer or a first course, it was always accompanied by sour little cornichons (hand picked gherkins) and the freshest baguettes you could buy at the boulangerie.
Pate de Campagne with Black Pepper – Traditional – 1 x 3.6 lb

Another “must” of course are thin slices of crusty baguette.

Cornichons and Dijon style mustard are easily found in large supermarkets including our local Wegmans.

Most bakeries have Vie de France® baguettes but be sure to find a crisp and fresh baguette!

Time it right and you can get a supermarket baguette right out of the oven.  Our Giant Food® bring their freshly baked baguettes out at 4 pm.

Wrap in a large dishcloth, tuck in the corners, and keep it fresh until dinner time.

Nothing can duplicate the aroma, flavor, and texture of a homemade pâté, be it pork, duck, or rabbit but they are time-consuming to prepare. Easy but don’t plan on it for tonight’s get together.

Please don’t tackle this pâté de campagne recipe the day you plan to serve it.

Prepare any version of a Pâté Maison recipe 1 or even 2 days ahead. In any case, the flavors will have time to meld and it will taste even better.

This particular pâté is more properly called a terrine because it does not have a pastry crust.

Restaurants will definitely make the distinction between a terrine and a pâté en croute [in pastry crust] although the filling is similar.

During hunting season, great-grandmother’s specialty was pâté made with wild rabbit or hare.  Farm raised rabbit were strictly for fricassés.  More often than not, the Pâté de Campagne came as an entrée for special family reunion Sunday dinners but sometimes it even appeared on the table during the week particular during hunting season.

The recipe contains few measurements as quantities for the ingredients depended entirely on the size of the rabbit my great-grandfather caught.

She also did not add any herbs such as thyme or bay leaves preferring the flavor to be au naturel and used her incredibly smooth, homemade apple brandy [eau de vie].

By the way, her cherry brandy was just as outstanding!

In a letter, written long ago, she shared her recipe, which appears below, translated verbatim.

“De-bone the rabbit. Weigh the meat. Add an equal amount of pork shoulder [because the pork fat will melt].

Put all of the meat through a meat grinder along with a few cloves of garlic.

Weigh the ground meat. To the ground meat, add 1 small liqueur glass of brandy, 5 grams of salt per pound of ground meat and barely a pinch of pepper for the whole amount of meat.

Mix well and place meat in a terrine mold for cooking.

Medium hot oven but not too hot as the pâté will burn on top. It must cook slowly.

Amount of time depends on the size of the pâté; you must remove it from the oven, insert a knife blade in the thickest part of the meat.

If no blood appears, it is done.”

So The Story Goes…

Her letter goes on to suggest,  “When you are here for Christmas, we will prepare one together”.   She recommends her own apple brandy and no herbs. She used to say au naturel, c’est meilleur!

It was also long ago that great Uncle Paul, with the army in Tunisia, would bring his family on home leave to visit Grandmère.  Little Jeannot would refuse to eat or even taste the pâté, convinced that his grandmother has prepared a pâté de mouches (a fly loaf).

Jeannot, back at home in Tunisia, was used to seeing flies everywhere, especially on meat, was sure those little burned spots were baked on flies!  I can sympathize.  I’ve seen my fair share as well under nearly the same conditions.

Those little brown spots on the surface of the meat are caused by the uneven temperatures of a wood burning stove.

Try It With Rabbit!

Needless to say, few of us today are likely to find fresh, wild rabbit for this recipe.

A trial recipe, prepared with frozen, farm raised rabbit meat found at the supermarket, was very disappointing so great-grandmother’s original pâté de campagne recipe is now cataloged with memories of times past.

Can You Buy Pre-Ground Meats To Make A Pâté de Campagne?

The answer to that question is yes.  However, after cooking you would have a homogeneous mixture meat -not anything that looked like a true pâté.  You are not aiming for meatloaf but small bits of meat most not larger than small dice.

The best way to duplicate this recipe is to use pork, ham and/or veal, as well as herbs.   My preferred kitchen gadget to chop up the meat with a food processor but you can also use:

You can also use the Norpro® meat grinder but it is really not designed for heavy duty meat grinding.

What would we do without food processors? In this case, it is much more efficient and easier to clean than any meat grinder.

For 4 to 6 servings, divide recipe in half.

Seasonings to taste with:

It’s all about taste – your taste. Remember that a pâté is eaten cold.

What about the texture of the finished dish?  The finer you chop the meat, the more evenly grained the pâté will be.   Here again, it is a matter of choice.

Use the food processor to chop the onions.  Pulse to chop, adding cloves of garlic to last few pulses.

Next, process the meat but while the processing meat, melt half the butter in a large frying pan.

Cut pork shoulder into even sized cubes. Working in several batches, place meat in food processor fitted with metal blade. Process the meat until coarsely chopped.   Transfer the meat to a large bowl.

Add the beaten egg. Whisk the ingredients together well until no lumps of flour remain. Add to mixing bowl. Once again, mix all ingredients.

Spoon the meat mixture into your terrine or loaf pans, making sure to compact the meat.  Place 2-3 bacon strips over the meat. Top with a bay leaf.

Remove from oven.   Pour out the water from roasting pan, but place your loaf pans back in the roasting pan.

Pâté de campagne recipe – Right out of the oven!

Cover the meat with double layer of foil.

Place heavy objects on the foil to weigh down the meat (a brick or large cans work well as long as the weight is evenly distributed.

It actually tastes better a day later. As I said earlier, this recipe is time consuming but not all that difficult to prepare. Your efforts will be greatly appreciated!

Short on time?  You can buy a ready made country style pâté.  The primary ingredient for pâté de campagne recipe is almost always pork.

Gourmet markets will offer several brands and types of pâté including the Country style version.

An inexpensive and particularly flavorful brand is the 5oz. “Tour Eiffel“ pâté found in the deli section of larger supermarkets.

You can choose to prepare a platter with the pâté as centerpiece, or serve it on individual salad plates.

Place a small slice of pâté on the plate with a cornichon or two, and decorate with a sprig of parsley. Place your slices of bread around the edge of the platter or serve in a basket.

Cooking Tip: Half the recipe fills a large loaf pan or a 1 1/2 quart stoneware terrine.  To prepare your pâté de campagne recipe, use a 6 quart terrine pan or 2 large loaf pans.