Recipe French Bread Stuffing – I’m not sure why it never crossed my mind to make turkey stuffing using a baguette or any other type of French bread such as a Boule or a Pain de Campagne (country bread).  Until now.

It’s not as if the choice of breads is limited.  In fact, the flavor and texture of French bread is perfect for stuffing!  Just look at the selection pictured below!

Don’t feel like tackling turkey stuffing from scratch? Check out the semi-homemade stuffing and dressing options

Do we celebrate Thanksgiving in France? Technically no. We don’t. There is no such holiday on the calendar.  But since 1952, for my family and I, the day is forever associated with Art Buchwald!

This family has one foot firmly planted in France and the other firmly planted in the United States so we celebrate major holidays from two countries.  But adding French inspired recipes to the menu is tout a fait (absolutely) fine.

We do make stuffing and stuffing can be made with French bread aka une baguette! How do you say bread stuffing in French?

In French, any type of stuffing is called called a “farce”.   For example, an authentic Poule au Pot is stuffed (with a meat/bread farce) even though is is a “boiled” dinner.  Roasts, fish and poultry can all have a “farce” – some without and some with French bread. 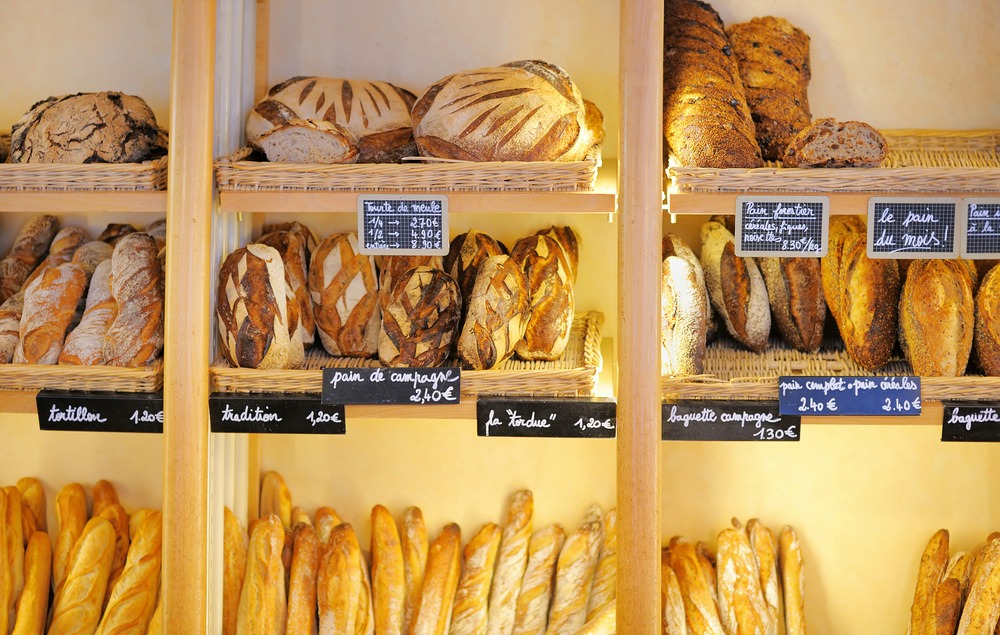 We do celebrate a traditional Thanksgiving and other American holidays as vigorously as we do major French holidays and traditions such as the Christmas Eve Réveillon.

When we lived in various countries around the world, a plump chicken replaced the turkey, Mom prepared a simple stuffing using the local bread, we thumbed through the pages of the current Ideals Thanksgiving magazine

and tried to make what passed for pumpkin pie.

More often than not, the pumpkin pie was replaced with apple pie because apples are available just about everywhere – if you know where to look.

Back then, it was more of a date on the calendar rather than a holiday with a four-day weekend.

The weather did not necessarily feel like November and there was no going to Grandma’s house – using any method of transportation!

Maman’s most cherished memory of her childhood is dressing up in their church-going best and having lunch with the entire extended family every Sunday.  The entire family under one roof every Sunday lunch.  Very traditional!

Recipe French Bread Stuffing – There are so many delicious recipes that I created a Pinterest board just so I could collect them all!

Year in and year out,  as we remember where we lived on any given Thanksgiving holiday, the  memory that brings the most smiles is one that dates back to the early 1950s.   We were in the kitchen when Dad burst out laughing while reading the morning paper.

“You have to read this!”   It was Art Buchwald’s column in the International Herald Tribune.  Those were the years he wrote for the Paris Herald Tribune.

Art tried to explain why Americans eat turkey and the concept of Thanksgiving to French readers because on that day “Americans eat better than the French do”.

Our family could absolutely relate to his use of both languages throughout the essay.

At the time, we spoke that way at home!  So we clipped the column and took it with us on our world adventures.  I found it just a couple weeks ago going through recipe clippings.

As we gather again this year for the Thanksgiving celebration, we’ll recall those holidays spent with dear friends and fellow Americans, all of us living far from the United States. And France.

We will read about La Merci Donnant, explain the meaning of the article to the grandchildren and rejoice in knowing that we are all together under one roof rather than continents apart.

And in 2017, as it was last year and from now on, the turkey will be stuffed with a savory french bread stuffing wherever we may gather round the table.

P.S. Love my stuffing bags!  Don’t you hate it when much of your stuffing stays in the turkey cavity?

I always feel as if I lose at least half the stuffing.  Stuffing bags are 100% culinary cotton – disposable too – and allow for all those scrumptious turkey juices to moisten and flavor the bread stuffing.

Recipe French Bread Stuffing – There are so many delicious recipes that I created a Pinterest board just so I could collect them all!

There are so many delicious recipes to be found that I created a Pinterest board just so I could collect them all!

Any one of the dressings described below could be added to a personal list of perfect Thanksgiving dinner recipes.

Don’t forget recipes for cranberry relish, sauce or salad and how would we manage Thanksgiving dinner without Reynolds Wrap

Standout selections are listed below  – some using French bread, some not. It does not mean that you can’t substitute the regular potato or sourdough bread  with a baguette or two.

Averie knows cooking… and turkey stuffing! This dressing looks scrumptious without even reading the recipe but please do read through it!

French bread, homemade sausage (I’m using great grandma’s sausage mixture for stuffed tomatoes) as one of my main ingredients along with shallots, fresh thyme, sage, rosemary and bay leaves but a minimum of celery.

This scrumptious recipe is from AverieCooks.com

And since we’re on the topic of Thanksgiving, you may want to sneek a peek at Averie’s Thanksgiving pumpkin desserts

Replace the sweet sausage with well seasoned country sausage and rethink the addition of half and half.

Then again…it would make a spectacular side dish and allow the bird to cook more quickly.  This may be the winning entry.

where she has a recipe for the ultimate “make-ahead” roast turkey and a gravy with onions and sage!

It’s hard to argue with a recipe from Bon Appétit© magazine! I agree that there is no reason to make this difficult. It is an easy recipe and simple is always delicious – especially when dished out in beautiful seasonal serving bowls

Try the “Simple Is Best Dressing” for your turkey!

Do you have any Thanksdgiving questions? They have all the answers

I would not have any trouble selling this recipe to the bacon lovers in my family. They claim sausage is optional but the fresh herbs and olive oil probably make this a tasty stuffing option.

How often is HGTV wrong when it comes to the entertaining with style? They actually have another stuffing recipe that would taste just as good.  Love the simple serving dish! Time to bring out the decorative serving spoons

Here is the recipe!

Imagine that – Ree uses French bread in this stuffing recipe and Italian bread and cornbread too!

Makes a whopping 18 servings. Three cheers for the Pioneer Woman. 🙂 Love her show and her Thanksgiving stuffing!

Wondering what Ree’s best kept Thanksgiving secret is? It’s #14 in this list of tips

There are times when you want to make things quick and easy by opening a box of Stove Top© stuffing. Not on Thanksgiving. Make any of these recipes instead.

Maybe we should check on what Martha has in mind but you could also make a French bread stuffing recipe. 🙂