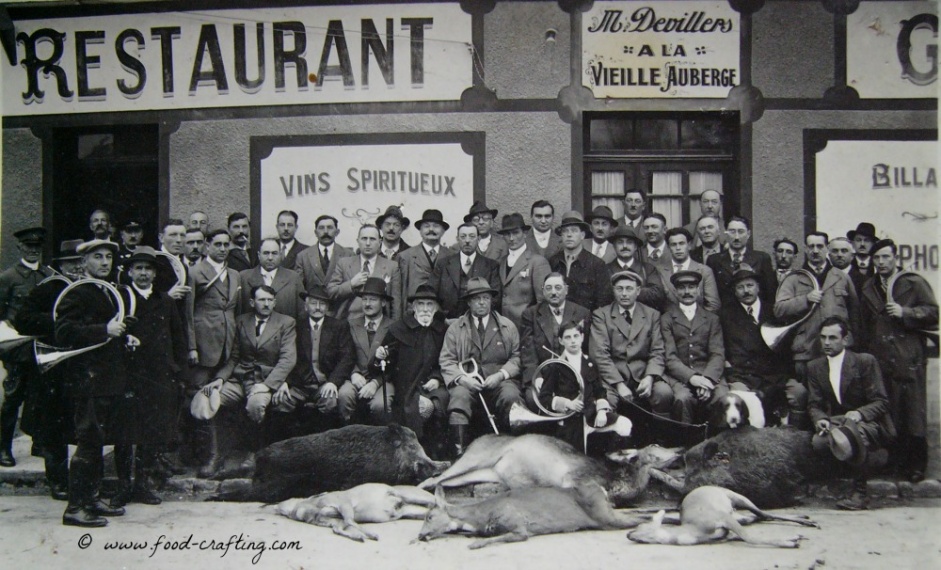 Why did I opt to use the word “factlets” when writing about the little known bits of information about me?
According to the urban dictionary a factlet is defined as:

A trivial, ephemeral fact; yet just as accurate. Not to be confused with factoid, which denotes less than accurate.

For example – “After a little research, it turns out that Jim’s little factoid the other night was actually a factlet.” (This will change how people think about President Taft).

I will, however, argue that these factlets are far from ephemeral. No passing fancies listed here. Just me.

Let’s make this Factlet #1 – Because that’s typical of me. I have to check to make sure everything is just right; it’s more out of habit than obsession.

I am a stickler for research. Ok, which one of my ancestors put the “check it” gene in my DNA?

Sure enough, after checking on several definitions of the word, I found that what I am about to reveal are true facts, albeit trivial. PICARDY FLAG 3′ x 5′ – FRENCH REGION OF PICARDIE FLAGS 90 x 150 cm – BANNER 3×5 ft – AZ FLAG

I love to cook.  Grew up eating all types of cuisines. It’s all good if you’re willing to taste it.

Won an escargot eating contest when I was 12!

My favorite foods? There are quite a few! Pears, raspberries, gooseberries, currants, and Mirabelle plums.  Artichokes, asparagus, tarragon, chives, spring onions and garlic. Steak Tartare, venison, mystery meat kebabs and seafood. Madelaines and crêpes flavored with rum! There are so many more foods from each country I called home.

Born in the Hauts-de-France region of France, I spent months on end there with my grandparents and great-grandparents while my parents lived in post-war Berlin.

My great-grandmother ran a food canteen during World War I while my great-grandfather (the consummate military man since age 18) was fighting in the Vosges and other fronts.

My grandparents ran a general store and my grandfather would travel around the region selling merchandise right off his truck.

Sometimes I rode shotgun with my grandfather, sometimes I stayed in the store with Grandma sorting cotton hose, making sure all the aprons and shirts were folded correctly.

I would also re-arrange bobbins of sewing threads after a customer searched for just the right shade of black. It was often a time consuming search, filled with chit chat, the current sewing project and bringing everyone up to date on family matters.

In my mind, I found it difficult to understand how an adult could take so long to select from black, white, grey and a few basic colors of thread.

Learned about subsistence gardening at an early age because it was post-war France.  Not because it was the cool thing to do – because all country folk had a “potager” and a flower garden.  My grandparents had the most amazing vegetable and herb garden. Worked in it with my own set of garden tools.

Every day, we’d head out to the garden for fruits and vegetables.  Potatoes, carrots, white asparagus, leeks, lettuce, parsley and other fresh herbs. 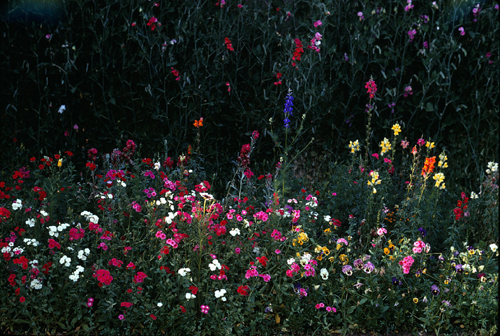 Bread and meat were purchased daily. Each meal was planned more or less according to the day’s available produce and meats.

The butcher made his appointed rounds between 11 am and noon.  The choice of meats was limited to what had not already been purchased!   Walked to the neighbor’s  farm every day for eggs and milk (straight from the cow – non pasteurized).  I’m still here to talk about it.

The baker drove by in his van early in the morning with fresh baguettes and croissants.

Everything else we grew in our garden. No refrigeration. You bought it, grew it, prepared it, ate it. Done.  Leftovers went into a pie safe  in the cellar. But not for long.

Years later…that day to day country life and home style cooking came in very handy when living “off the land” in third world countries.  BUT…it did not prepare me at all for what I would have access to in the USA – supermarkets! Imagine that.  True culture shock.

Stale bread and other tasty morsels were set aside.  Made “soup” for my grandfather’s 12 hunting beagles and basset hounds. No worries.  I won’t be sharing that particular recipe.

It was a recipe for PIZZA that started the whole “I love cooking!” mindset.  A  made-from-scratch deep dish pizza. No sooner did I prepare it the first time, it would be years before I was anywhere near the required ingredients again.

My favorite seasons are Spring and Fall. Can no longer take those “hot enough to fry an egg” temperatures I was accustomed to in Africa and South Asia!

Crossed Europe on the original Orient Express.  Quite the adventure but I never met Hercule Poirot!

Photography is a family thing.  All the way back to Dad’s single extension bellows Zeiss Ikon Onito with a folding bed! I still have it.  Everyone in the family caught the bug.

Am addicted to Masterpiece Theater and the BBC.

Can’t say I have old time favorite TV shows because TVs were unknown where I lived. I either experienced it first hand, heard or read about it months later or heard it over the BBC when the signal came through!

Nothing like getting together on a clear cold night (thanks to time zones and the atmospherics) because the signal on the transistor radio was coming through loud and clear!

I love forests and woodlands. Grew up surrounded by well known forests in historical locations.   My heart was, is and will forever be in the woodlands I used to roam with my grandfather.  He retired to become a Hunt Master – the old fashioned kind with horses and hounds.

As hunt master,  he trained his horses the same way he had trained them for years as a member of the Cadre Noir at Saumur.  When I was old enough to sit steady on a horse, he taught me every riding trick in his book.

There could not be a better representation of all my favorite sights and sounds than the images seen in this video.   It’s my little corner of France.  Those participating in the video include my grandfather’s “Rallye” or team.  Even Dad belonged to the same Rallye.

While the music in the video is quite familiar, this tune plays in my mind on a constant loop. I was there for all the practice sessions because Grandpère was the solo player in his band and as a Chasseur Alpin during his military days, it was also his regimental music.

Today, I have deer walking through my little patch of woods.  They are tame enough to snack on my flower beds at the front door.  It takes me back beaucoup de years. 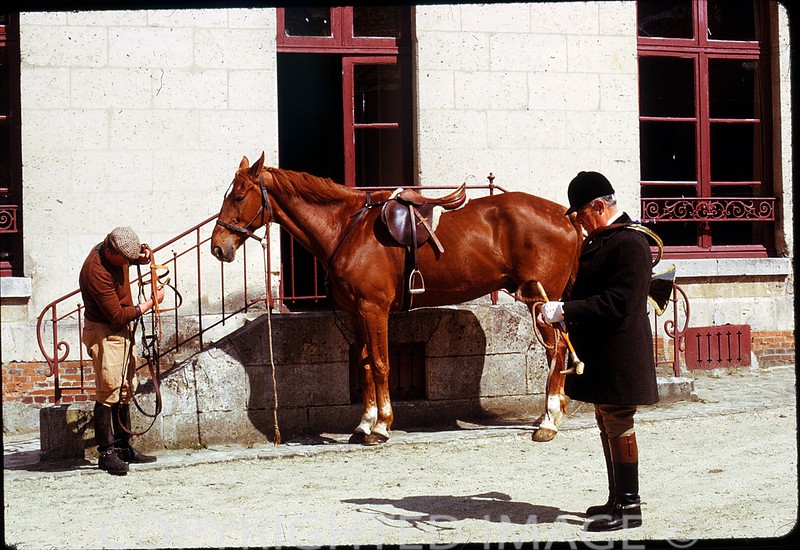 I love the mountains too. The Himalayas. Because I have intense memories of my time spent in the Hindu Kush.

Earthquakes. I hate them because I experienced them.  Case in point – Kathmandu, Nepal.  I’ve walked those streets.  I’ve seen Sagarmatha. I can feel the devastation.

Research – it’s my “thing” and what better topic to research than family history? I am deep into genetic genealogy – at the DNA level.

I was born and raised in France…and Germany, Yugoslavia, West Africa, Cyprus, Lebanon, Turkey and every country in between on four continents including South Asia. During peace and in war time.

Learned to walk on Omaha Beach.  Yes, that beach when it was still littered with hedgehogs.

In 2008, I learned what Dad was REALLY doing in all those countries we called home.

Love to read.  Dad assembled a mini library for me before I was born.  He exchanged his cigarette rations for first editions from some well known authors. I was a teenager before I could read them. In English.

English is not my native language.  The study path I took in High School required several foreign languages.  I  also picked English – The Queen’s English. By the way, English is not an easy language to learn.

Much later, I discovered that my American grandmother was a well known English teacher.  No wonder she freaked out at the thought of having a grandchild who could not speak English – not even American English. Rest easy Grandma. I fixed that.

I’m a secret shopper. So you’ll never know where I am or what I’m checking out.

Love the fragrance of white jasmine on the vine where it grew up to my second floor balcony! Memories now – An aspect of life in the sunny Mediterranean I cannot replicate in Northern Virginia.

Love antiques and old things. Anything with a history to it.

Let’s hope these 25 random factlets do not change how you think about the way we eat… or about me.  I do have a different outlook on just about everything including food.

Check back often and let’s chat.  Time marches on and I’m sure to edit the list as I recall other little known bits of information.