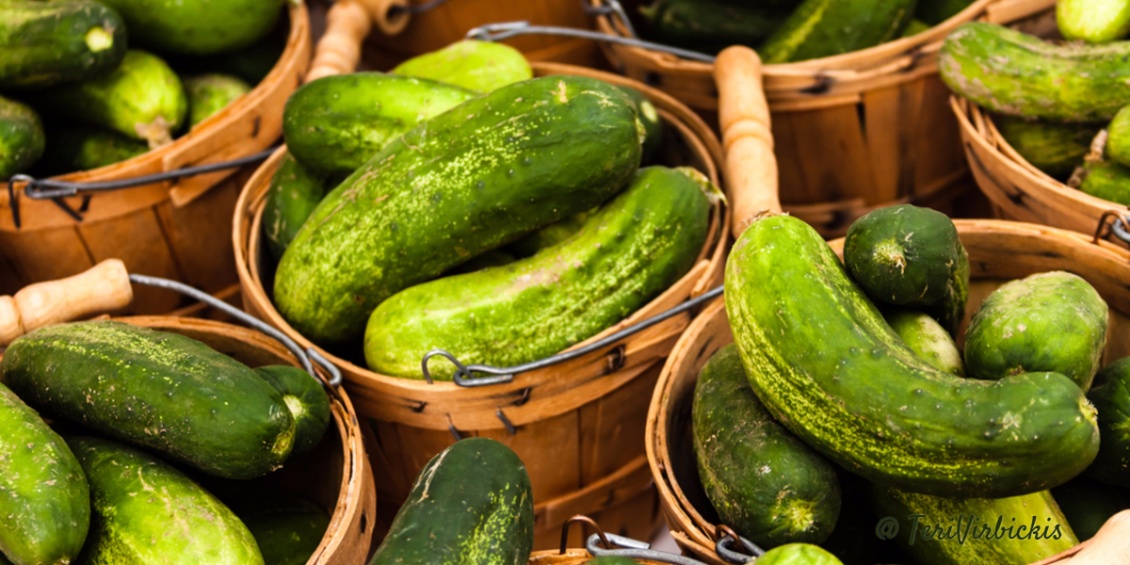 Bread and Butter Pickles – Along with the chicken and potato salads dressed with homemade mayonnaise, Granny’s Bread And Butter pickles were another featured favorite at our hometown farmer’s market.

This recipe is for everyone who loves the “fresh from the farm” flavors of homemade foods and condiments.

With “Cornichons” as my idea of a pickle, I will admit that homemade bread and butter pickles come in at a close second.

It may sound like a serious contradiction in the taste buds but both varieties usually find their way to the table so that we have everyone’s favorite available as a condiment.

Guess it can be attributed to cultural diversity and a multinational heritage.

While one type is definitely on the sour side thanks to its vinegar bath, the bread and butter pickle is a sweet concoction which my in-laws used to prepare at home.

With half of the family roots deep into Pennsylvania Dutch country since before the American Revolution, it is not unusual to see an odd variety of homemade condiments on our refrigerator shelves or in the basement pantry.

Let’s step back in time when canning and putting up were the norm.

Canning was a yearly “ritual” and we cherish the recipes for the various baked and canned goods which made it to the “family” table at the local farmer’s market.

The “Recipe Book” pictured above was started in 1934 as a project in a College class called Home Arts.

The student was my mother-in-law. Between the pages were all those little slips of papers for recipes belonging to her mother and grandmother.

In fact, we also have their first cookbooks…which were also filled with little notes as to family preferences.

Along with the vintage recipe for homemade bread and butter pickles, we have grandma’s favorite recipes for pickled eggs, spiced peaches and crab apples, quantity pumpkin pies, and various dressings and homemade mayonnaise for their “famous” salads.

Mind you…there is very little in the way of instructions or directions with these recipes. The how-to was obviously passed down visually and verbally from one generation to another.

As the “outsider” in the family, I’ve sampled the spiced fruit (actually loved the spiced peaches), eaten the pickled eggs (reluctantly) but they were never able to make me eat the piccalilli, chow chow, the sweet pepper relishes or green tomato relish. That’s where I drew the line.

Here is the family recipe.   It’s really short and simple. It consists of:

The syrup is made with:

You are to “cook to boiling point then add the sliced onions and cook partly down”. Then add cucumbers which have been sliced thin (and then set in salted water – drain cucumbers well). Add drained cucumbers to syrup.

Done.   How simple is that?

This is a recipe with no instructions so it’s time to improvise.

See that little slip of note paper ripped off the coils? That’s all there is to the recipe!

Seeing as there is little else to go by, and they had stopped making pickes long before I arrived on the scene, here is my take on the sparse and vague instructions on how to make bread and butter pickles.

It would seem to me that the logical first step in this recipe would be to slice the cucumbers, place them in a sieve, sprinkle them generously with kosher salt (the coarse variety) and allow them to drain out most of their moisture. Toss them gently to distribute the salt evenly.

Allow the cucumbers to sit and “sweat” for several hours, maybe two to three. Drain the cucumbers and place on a paper towel to absorb most of the moisture.

Use white sugar and white apple cider vinegar. For added flavor, we would add a couple tablespoons of mustard seed to the syrup along with a small amount (maybe one teaspoon) of turmeric.

Prepare the syrup as described above and add the drained and dried cucumbers as the last step.

Missing on the little slip of lined paper is the “putting up” process. We will go with the traditional methods of placing in jars, adding liquid to cover the pickles and sealing tight.

What If You Want To Make Lots of Pickles?

As in 200 Pickles 0r 22 Pints?   We also found an interesting handwritten note which obviously belonged in the 3 ring binder Margaret used to organize her collection of family recipes .

The note includes ingredients and instructions for making two hundred pickles or an equivalent 22 pints of homemade pickles. We will assume this recipe was calculated and prepared for a “special” at the Farmer’s Market.

Here is another rather vague recipe.

Boil enough water to cover the pickles. Allow to stand for 12 hours (overnight)

Pack the pickles in jars. Pour cold liquid over (Do not cook).

What do you eat with bread and butter pickles? Sandwiches, hamburgers or do you eat straight out of the jar as a snack?

Aioli Mayonnaise Recipe: 100 X Better Than Mayo From A Jar!

Previous Post Comparing Healthy Cookware Next Post Cooking Picnic Ham: How To Make Dinner For A Crowd!
Food Advertising by