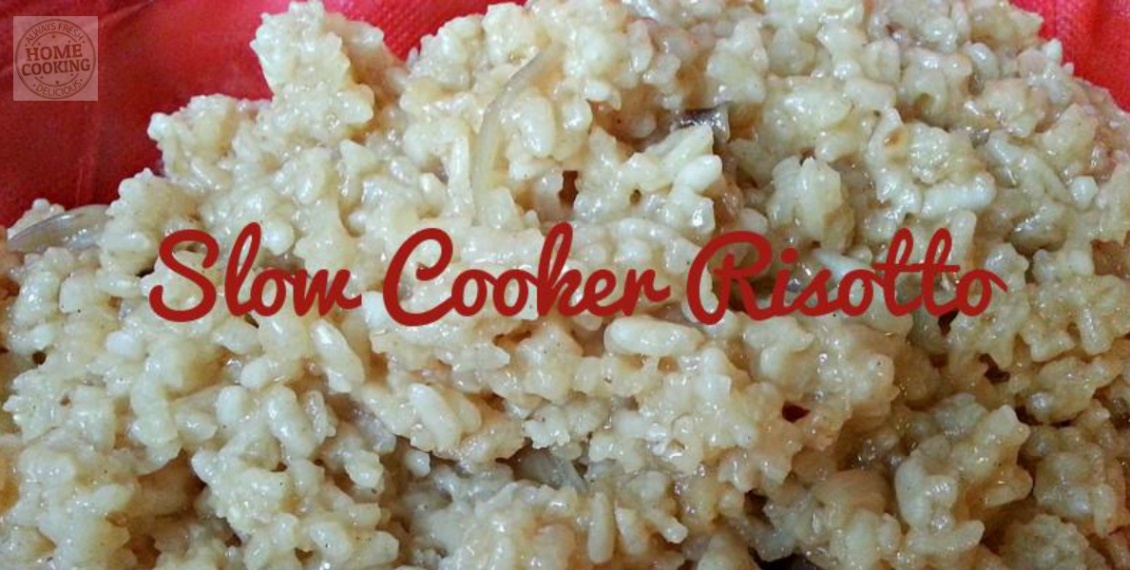 Slow Cooker Risotto Recipe – A simple risotto was the subject of a kitchen test.  All I wanted to do Saturday afternoon was to prepare risotto in a slow cooker, but a poorly packed grocery bag almost ruined the rice cooking experiment.

The tailgate opened as I hurriedly walked towards the back of the car and the bag unceremoniously slipped out of the door emptying all its content on the driveway.

An expensive bag of Arborio rice and cartons of broth (among other groceries) hit the pavement with a splat. The bag of rice split open and showered grains all over the driveway. The shallots rolled under the car. You can visualize the scene. It was an ominous beginning to a first attempt at making risotto – or any type of rice – in a slow cooker.

The family matriarch is having a birthday next week and we are in the finishing stages of planning a menu for the dinner party.

The appetizers and drinks will feature a selection of all-time family favorites, but we just cannot decide on the components of the main meal. We would prefer a buffet style meal.

After the fiasco in the driveway, it was high time to get the rice, Bouillon and shallots into the slow cooker to see if great tasting rice in a crockpot is even possible.

The first test is to make Risotto in the slow cooker the same way I prepare it on the stove-top.

There are few steps before letting the slow cooker complete the cooking process.

In a medium frying pan, add 2 tablespoons of butter with a tablespoon of robust flavored olive oil. When the butter begins to sizzle, carefully add a finely sliced medium sized shallot to the pan. Fry over medium heat until the shallot is golden brown.


Add 1 cup of Arborio rice to the butter and shallot mixture.   Mix to blend well and cook over low heat until the rice takes on a golden color – about 5 minutes.

Spoon the rice and shallot mixture across the bottom of the slow cooker. Using a large spoon, spread the mixture evenly to form an even layer.

Pour two cups of Progresso® Tuscany flavored (with thyme, rosemary and basil) chicken broth over the rice mixture. Shake the crock-pot gently to distribute the rice in the liquid.


Set the slow cooker on HIGH for 2 hours with the intention of checking on the cooking process at regular intervals. Stir and level out the risotto every half hour.

The risotto was ready in 1 1/2 hours. I added approximately 1/2 of broth to prevent it from sticking to the crock.

I would recommend removing the risotto from the crock-pot to prevent it from drying out. Spoon into a dish and cover with wrap until ready to serve.

Next test recipe? A carrot and currant studded pilaf to have with a mixed grill!

Review of a Website That Does Essays For You

Advise for Creating a Data Room to get M&A Ventures